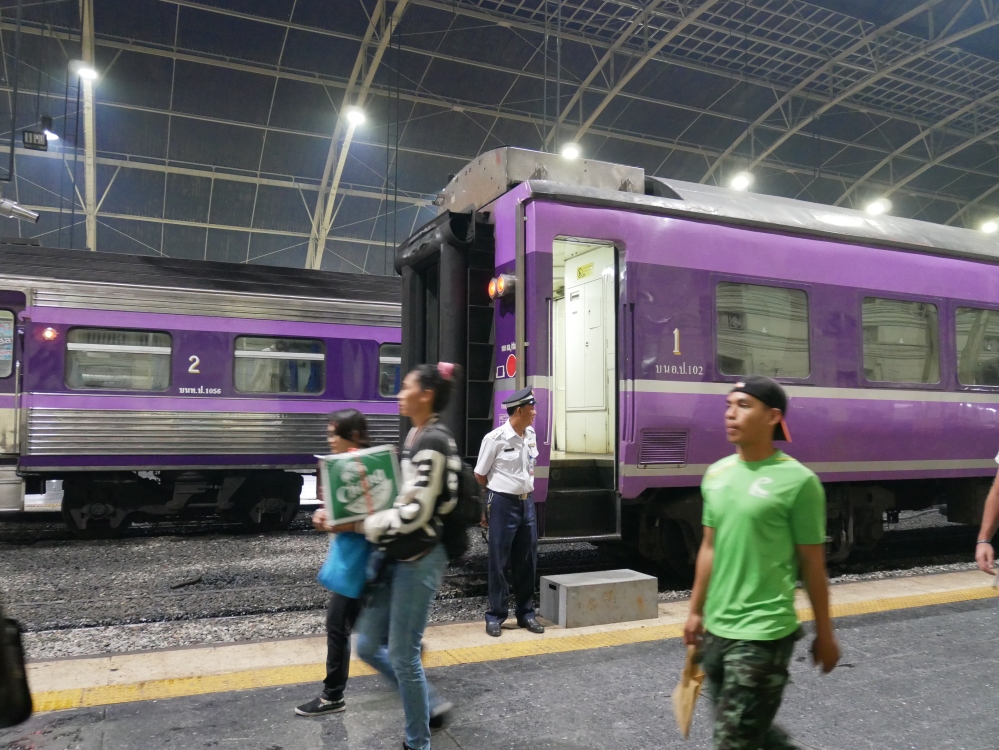 I can quite comfortably say that we have covered every single mode of transport that Thailand has had to offer.  And this was one of the more interesting, throwing some great people across our paths, zero sleep for me and one very insistent Thai service stew.  I am trying to work out whether I would or wouldn’t reccomend this mode of transport.  I am leaning towards the would- it was definitely an experience.  But maybe if I had had more sleep I would have been 100% sold.

In terms of organisation and scheduling, everything went according to plan.  The company we went through was excellent, even giving us a small rebate because the one bunk was cheaper than the other.  Once we had rushed to get to the train, we found our little sleeper cabin- sharing with a Canadian traveller and a Thai local lady, both very sweet.  Our bedding was placed in a neat parcel on our beds and Bryce played the incredible hulk, lugging everyone’s luggage up into the little storage space above his bed.  After making our beds with the very thin linen (BRING YOUR OWN BLANKET!!! it gets freezing!), the incredibly insistent Thai Stew came around with fruit cups and tea to buy.  She didn’t like to hear no.  Bryce was determined for us to have dinner in the restaurant cart and she was determined to serve us in our beds (getting a cut of the bill!)- the battle of the most stubborn on the train.  Bryce won.

And so after the train lugged forward on its journey and we had swopped some stories with our cabin mate, we made our way to the restaurant cart. Sadly, it was not the same as the Malawi train experience Bryce had had before- no beers were served and they chased us out as soon as all diners had eaten- but we still had an entertaining dinner, with our Thai stewardess trying her hardest to win Bryce over with all sorts of requests.  After a couple of rounds of cards, they were not having any of it with us staying there longer than needed and so they chased us to our cabins to go to sleep 🙂 She eventually won one battle. 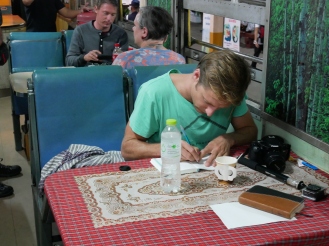 I spent the whole night reading and listening to the sounds of the train mixed with Bryce’s snoring.  It was actually strangely enjoyable to be doing something so different and to know I was moving halfway across this lovely Eastern country.  When I eventually got to sleep around 4:45, Bryce woke me up at 6am to come and watch the sunrise and the most beautiful part of the journey.  With a cup of water in hand and some fruit, we watched the beautiful greenery of Northern Thailand pass us by.  It truly was beautiful.  The windows were open and the sound of the rain was mixing with the sound of the train.  My inner princess quieted down by the enjoyment of doing something completely different for me. 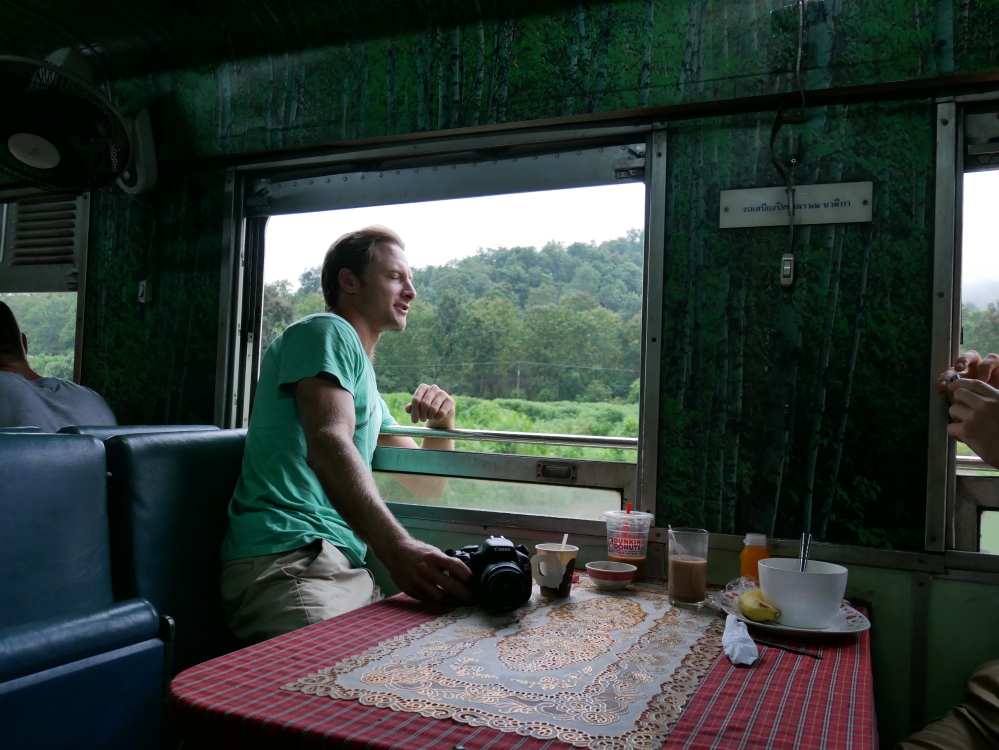 Bryce excitedly jumping from one side to the other side, mixing with the different tourists, trying to get the best shot. I was entrenched in a very interesting conversation with a Marine about his views on the newly elected Trump.  When i stopped to listen to all the American accents around me, most of them were expressing their views on his election and most were not positive.  It was an incredibly interesting time to be listening to the American twang. 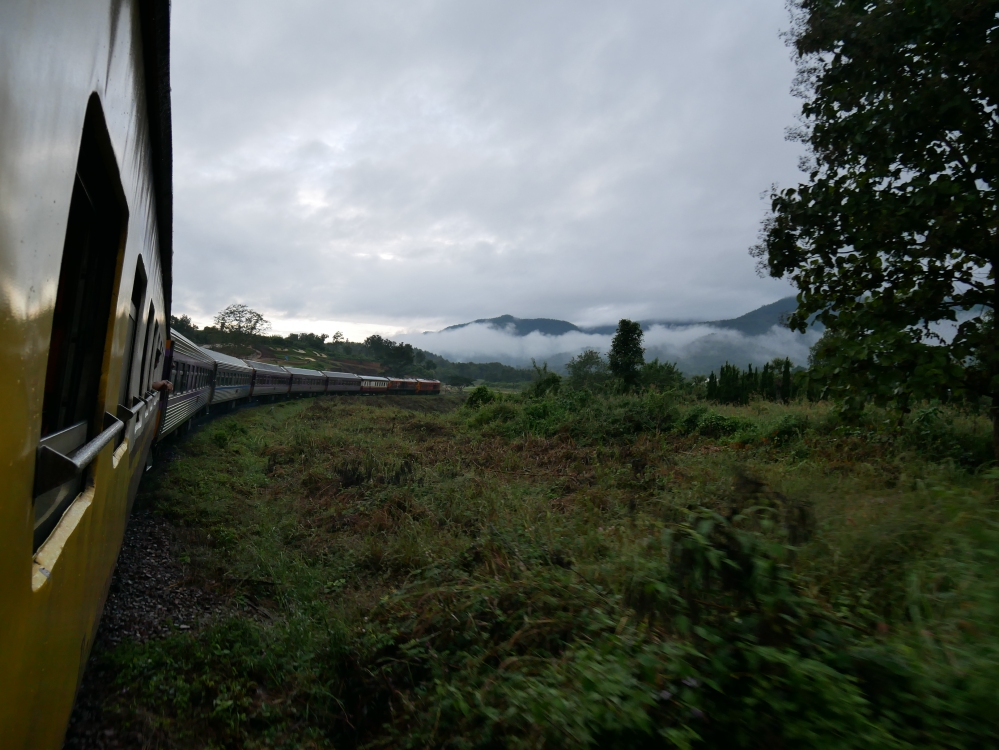 Eventually when the greenery turned more into a cityscape, we pulled into a beautiful train station in Chiang Mai and were rushed out by the conductor, time to turn the cabins over and head back South. With a smile on our faces and an excitement for the next part of our journey, we grabbed our bags and headed for the cheapest taxi option to our hotel.