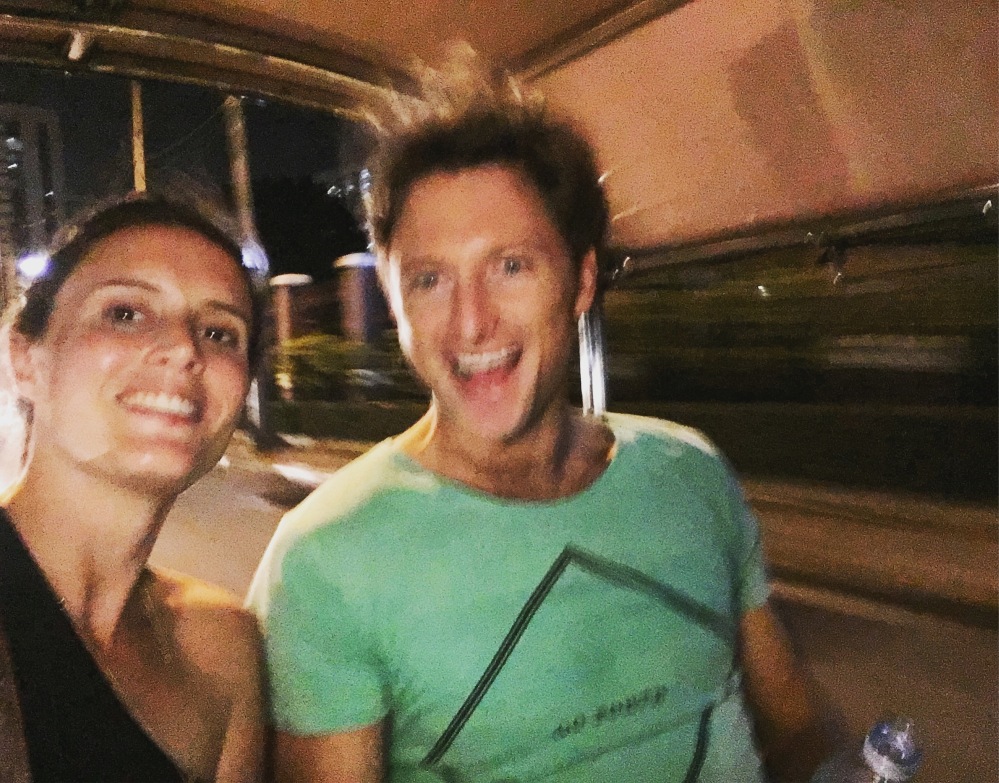 When you have one full day in Bangkok and you are experience Junkies like us, you don’t just sit in your great hotel, with the rooftop swimming pool, or go to a famous restaurant or fabulous bar. Instead, you fit in as much as possible, taking every form of transport possible, forgetting any idea of jetlag.  Tired? What’s that?

Nope, you drop your bags, jump in the rooftop pool to rinse of that Airplane feeling and then make your way down the road.  We were not quite sure where we needed to be, but we were starving and found a pretty amazing Thai restaurant not too far from our home base.  So we pulled in to their low lying tables, with cushions on the floor and were DELIGHTED that we were the only westerners in the whole spot!  We ordered some delicious Thai starters and then succumbed to the seemingly popular “bowls”.

“bowls” being a make-it-yourself kind of broth, where they bring a gas heater to your table, supply you with all the ingredients in your pot and you cook it yourself.  I was so excited by the fragrances seeping out of the broth, by the spices that came complimentary to the dish, by the presentation and by the fact that I was sitting on my haunches eating on the other side of the world.  Let the holiday begin 🙂

Any notion of an early night went out the window when we were tempted by the Bangkok night markets that we had heard so much about.  I was determined to not be coerced into buying bad quality clothes that take up space in my luggage and break as soon as you wear them! But it was hard, hard not to succumb, as you walk past rows and rows of brightly coloured items of clothes, bags, shoes…everything!  The squich of your shoes on the street, tells tales of many tourists passing through that evening.  Many excited vendors wanting to give you their “best price” or show you to a bar/ show down the way. 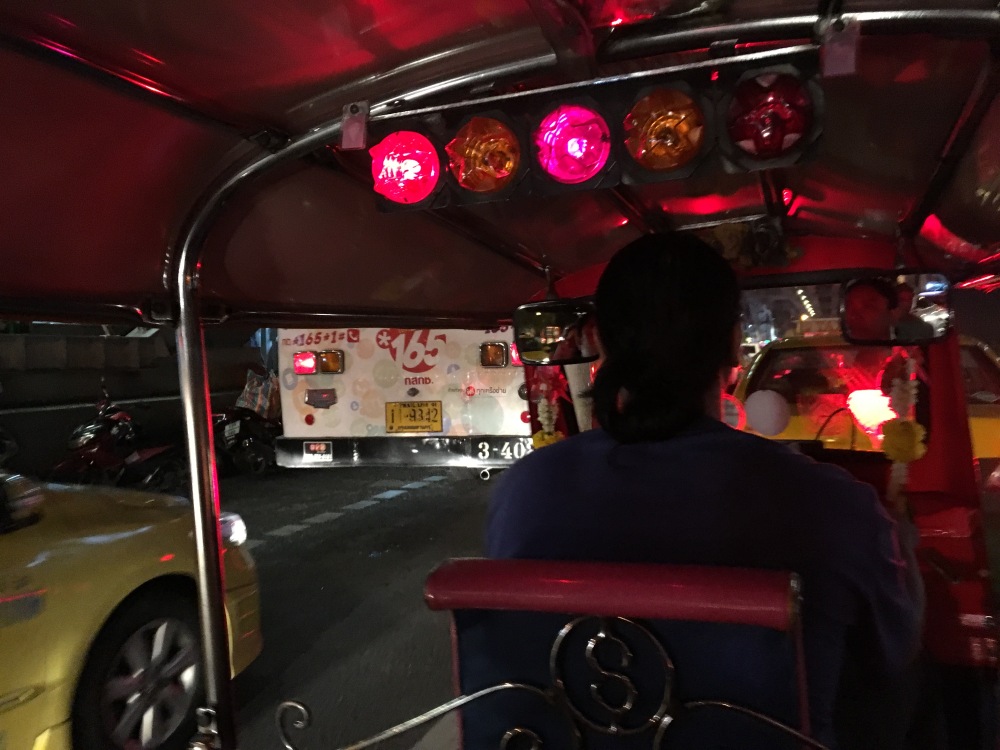 My fabulous boyfriend got conned into a “ping pong show”right off the bat.  This is something I can never unsee.  You can’t deny those ladies have a talent- but my goodness this was not my idea of a side show to my gin and tonic! But having ticked that item off the list, we wouldn’t have to do it again!

Our tuk-tuk driver was crazy, screaming around the streets like he was playing a major role in grand theft auto!  The lights, the colour, the sounds, the smells and the fast pace were all exactly the way I had pictured this bustling Asian City.  So many changing images everywhere, so many cars, so much of everything.  I was drawn in, but also slightly overwhelmed by everything it was showing us in such short space of time.

Breakfast was included in our hotel.  Which was a great move on our part for most places we stayed in this trip.  Although this particular breakfast was nothing to write home about, some of the ones we were treated to were delicious.  But still, we chatted to a couple of other hotel guests, confirmed our itinerary for the day and then headed out to the mania.  Our first intention was to get to The Grand Palace.

However, in order to get a good price on our TukTuk we had to stop in at a store on the way.  The store had cleverly negotiated with some of the drivers that if they were to bring drivers passed the store, the drivers would receive petrol coupons.  It took us a while to understand what the driver was trying to tell us, but it landed up being beneficial to our driver, Bryce and the store, as Bryce landed up buying a five piece suit, tailor made just for him.

What had really pulled at our heart strings from the moment we had arrived, was the absolute love the Thailand people had for their King.  Every person we met seem to have felt some kind of personal grief for his passing.  It was touching and made a lasting impression on me.  As we got closer and closer towards The Grand Palace, we started to notice that there had been some pretty big movements set up for those people traveling afar to come and pay their respects to the King.  An entire public garden had been covered in tents, complete with free food and water stands for those such people.  And there were thousands of people.

We visited the museum that had been erected in his honour to show the reactions of the world and most importantly the Thai People.  It was incredible, the walls were covered in images of people mourning his passing, of celebrating his life and honoring a man who seemed to have captured the hearts of his people.  One of the ladies who chatted to us there, suggested that he had been more like a Father than a King.  What a leader that must be.  Hard to imagine in our current Western situation.

From there we went to the grandesque and picturesque Grand Palace. 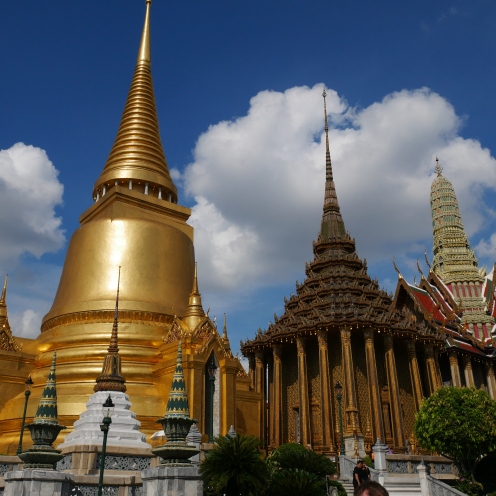 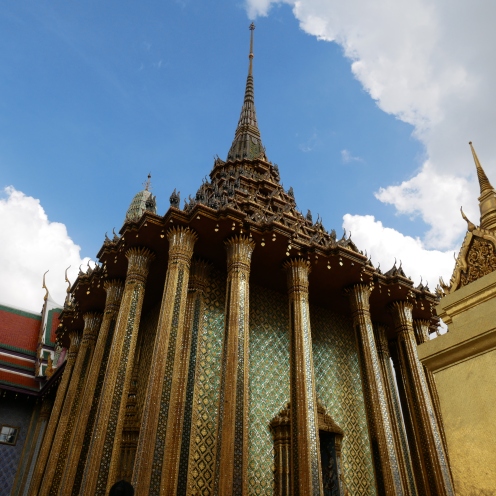 We decided, for once, to take the official tour, to hire a guide and let him take us around the palace, giving us the information that we needed to do and random bit of facts that are fun to know.  It was well worth it.  There are three different styles of architecture all combined in the one landmark- Thai, Vietnamese & Chinese. I felt like no corner and no edge had been left undecorated.  It really was a marvel for the eye! 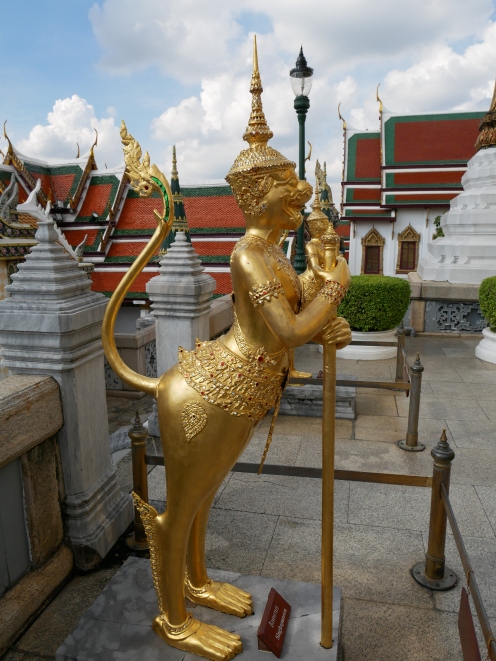 One of the most remarkable experiences in The Palace- is to visit the Temple of the Emerald Buddha.  Another highly ornate but very spiritual place for Thai people to visit.  In here there can be no pictures and no speaking.  it is amazing how the space resonates with a completely different feel.   Perhaps it is the silence that transports you to a more spiritual conciousness.  But it was beautiful and special to see a myriad of different, people, ages, languages and cultures all quietly observing this sacred space.

From the temple, we could not ignore the loud grumbling of our impatient bellies, calling us to the nearest and tastiest possible spot for a feed.  We also had to pick up our train tickets- so we ventured towards that area and then grabbed a bite to eat at a local spot called Bangkok Noodle.  The food was delicious!!!

Obviously, we were in a rush, our tendency to fit as much in as possible always leaves us running to make time cut offs.  And this time we needed to make our train, so we braved the local taxi scooter- dodging in between other mad vehicles, Bryce way ahead of me and my driver trying desperately to catch up to his mate.

We made it. Checked out. A ventured back to the train station.