It happened again, luck struck us. We found ourselves on another amazing boat, doing a great itinerary, TOGETHER. We wanted to pinch ourselves as we chartered through all the most famous islands of the Caribbean- from Antigua to St Barths and all the other beautiful ones in between. The charter was intense, but the crew we were with were amazing and, had the opportunity allowed, we would have LOVED to have stayed on there permanently. But, things worked our beautifully and we hopped off in St Thomas for a Mon-Thurs vacation (as they call it over here).

I was so skeptical,  I hadn’t heard very good reviews about the accomodation in St Thomas and so my inner princess was panicking. But, as we climbed the hill and got further and further towards the clouds, the views opened themselves up to us and we were treated to a panaromic view not only of the entirety of St Thomas’s West side, but also some of the surrounding islands. We walked in, and after I picked up my jaw, I very happily took our room key card and proceeded to our room. We later found out that Mafolie Hotel, is renowned for its extra-ordinary rooms and hotel restaurant.  And I highly recommend it, although the breakfast lady lacks a serious sense of humour, all the other staff make up for her.  Even when waking them up at 1am for a lost room key card.

On our first morning, we jumped into a a taxi.  Which in St Thomas is awesome, they are these open air taxis (almost like our safari vehicles at home (RSA)) that charge a large amount per person to take you anywhere on the island.  This time we were missioning to St John Island.  A picturesque island not far from St Thomas.  The moment we landed in St John, the colours of the Caribbean did not stop revealing themselves to us.  The terrific turqoise of the ocean is something you only see on post cards.  Without a moment’s hesitation, we were frolicking like children in the water.  We even had drawn a crowd, not noticing that we had started singing loudly to the nearby bar’s Bohemian Rhapsody.  It was quite funny.

From there, we hired a scooter.  The man initially told us that he didn’t have one, and after seeing the disappointment, he somehow made a plan and made our scooter mission a possibility.  Both of us with helmets on our head, dressed in our swimwear we scooted off down the 20 towards the vast number of beaches we had seen on the map.  And from there we jumped in and swam at 5 different beaches- Trunk Bay, Cinnamon Bay, Maho, Jumbie Bay and Francis Bay.  Each beach was absolutely magnificent.  By the time we arrived at the last beach we were starving, but the restaurant wasn’t open and the only option we had was to buy some tortilla chips and salsa, mango ice-creams and a deliciously ripe mango and make ourselves a little picnic spot on the beach.  I was actually quite happy to have had that be our food stop, it felt like we had spent every possible moment in St John on some little piece of paradise. 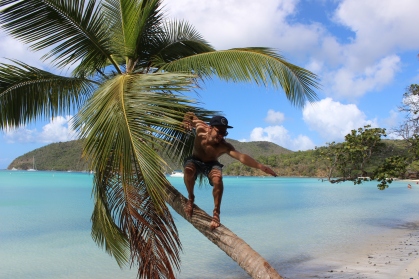 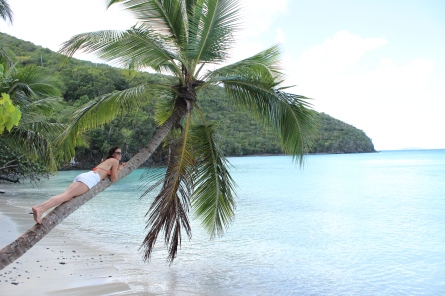 The day was completed with a pretty fabulous dinner at a beach cafe by the Ferry Port.  We first had some delicious coconut and mint coladas while played a number of rounds of “toss the bean bag”- even attracting some elder folk to join in on one of our games.  Bryce was good and I landed up loosing to him and having to buy him the third Coco-Mint-Colada, HIGHLY RECOMMENDED!  The ferry trip back was beautiful, on the open top ferry, we sat on the rooftop and watched the stars twinkling next to a rather grand-full moon, sun kissed and content. A perfect day.

The following morning the alarm went off at 7am.  Another very early beginning to another holiday day.  Tash/Bryce Style, we needed to jam pack it.  So we made our way down to breakfast, ordered our same omelettes from the same grumpy breakfast lady and then missioned down to Secret harbour to do 2 boat dives.  I hadn’t dived in a while, but the crew who took us out were fantastic.  There were only five of us and I was so excited to get down there again.  I always get a little nervous going down the first time, its the first moment of changing from normal breathing to tank breathing that always panics me a bit.  but once I am under the water, I am a pretty happy camper.   It was beautiful down there, with an array of colourful fishes and coral treating our eyes around every swim through.  Bryce has been spoilt diving in Shamil-Shaik, so I think every dive he does compared to that is nowhere near as colourful, but both of us just loved being “Under The Sea” again! 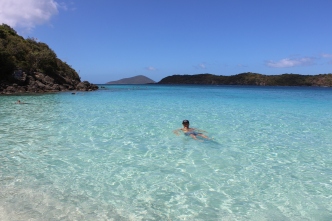 Our final day in Paradise was spent with another mission to one of St Thomas’s most beautiful beaches, Coki Bay.  We arrived in a rather expensive taxi and set ourselves up on the corner of the MOST aquamarine of all the beaches we had seen thus far.  Bryce’s Go-Pro got some real airtime, as we followed the little fish and Iguanas on their daily adventures (by us I do more mean Bryce).   It was the perfect way to end our stay.

We wrapped up our paradise holiday with an evening flight home, back to Fort Lauderdale, only with me to wake up the following morning deciding that I would leave that afternoon to go and do my Yoga Instrcutors in Thailand.  And so, the rush to book flight and catch my plane began early in the morning…but more on that in the next blog.

tash, a creative girl, with a love for food and the great outdoors, always moving, always learning. View all posts by Tashels

One thought on “Caribbean dreaming…”