I had seen Sintra on Instagram.  I had seen Pena Palace more specifically and I had my sights set on going to this colourful castle set high above the trees.  What I never knew is that yes, while Pena Palace is a sight to see, the rest of Sintra is equally entrancing, equally beautiful.

Serra de Sintra, a UNESCO declared world heritage sight, feels like walking into the pages of a fairytale book.  To your left you expect to see Rapunzel letting down her hair, to your right, Cinderella’s slipper to be on the stairs of The Sintra National Palace and through the gardens, Prince Charming, riding his white horse, ready to sweep you off to your “happily-ever-after” (a girl can dream).

We stayed in the most romantic of Guesthouses, Chalet Saudade, painted in light blue and decorated like an oversized dollhouse, with minuscule details in every corner that emphasised this idea.  Our room, slept all 3 of us in comfortable old wooden beds, a massive glass window decorated by the gentle and continuous November rain.  Our hosts, kind, generous and excited to share their beautiful town with us.   A conservatory, with its large bay windows overlooking the lush gardens with tips of the nearby palaces enticing the onlookers to go and explore.  The best part was the massive breakfast that was included in your room charge, at the Hotels’s Cafe across the road.  The traditional breakfast never stopped coming; croissants, coffee, local pastries, eggs, cheeses…it truly was endless.

I really think that the beauty of our trip and something I am so greatful for, is that we didn’t go in high season.  And so the crowds, the traffic, the general feel of all the spaces and places we went to, felt like we got them, mostly, to ourselves.  Sintra, was slightly more crowded than other areas.  However, I hear in the summer, it is packed. 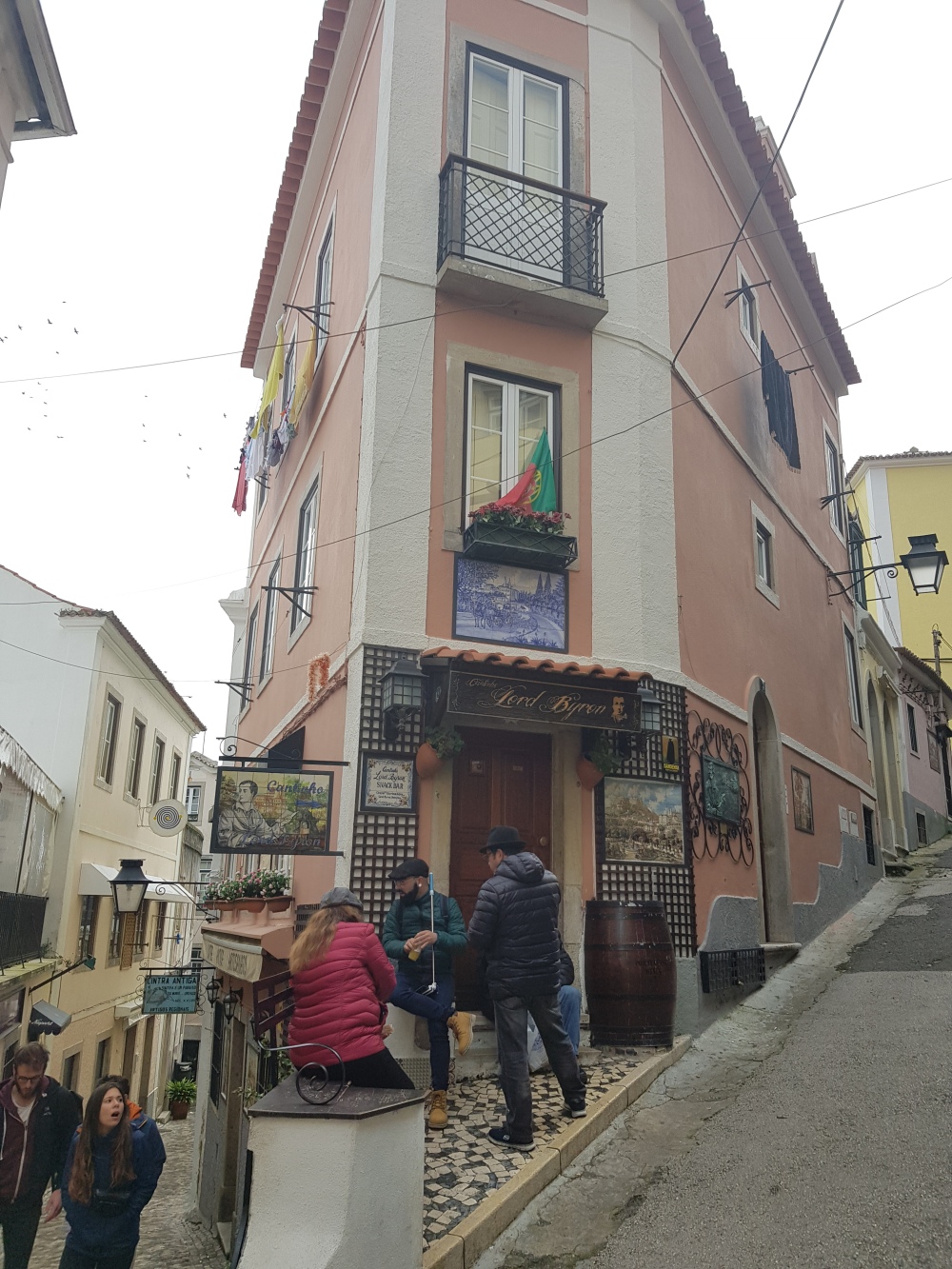 We set out early on the first morning, in the pouring rain, for a long walk up to Castelo Dos Mouros, an 8th century castle that extends all the way to the Atlantic Ocean.  We surprised ourselves by by landing up at the Castle too early.  The gates were locked.  And so, we just kept walking and found ourselves on the most exquisite forest path, winding down the hills and stumbling across an unexpected castle.  It felt like not many people had been there, but a quick google search let me know otherwise… 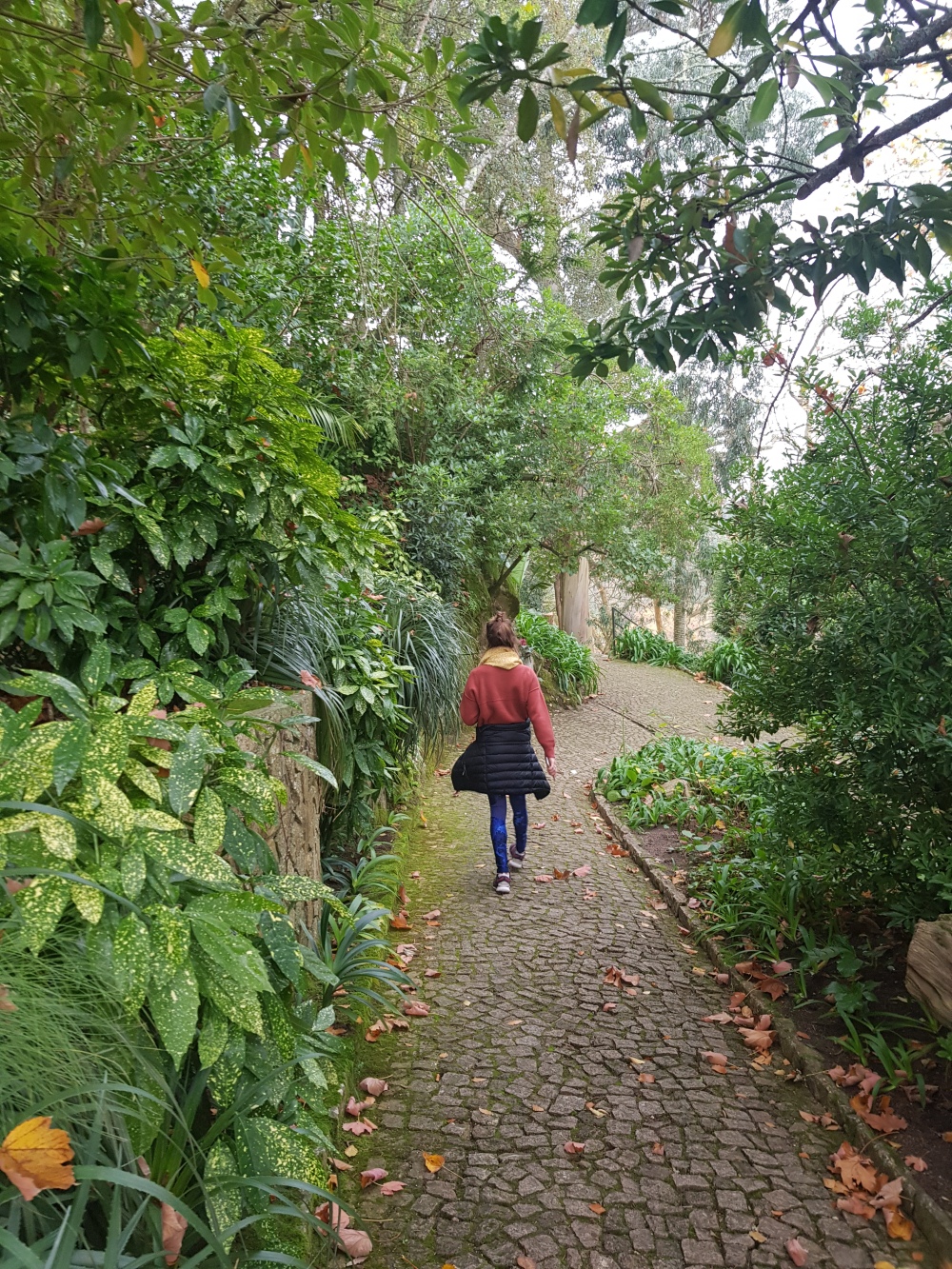 “Victor Carlos Sassetti (1851-1915), owner of the Hotel Braganza, in Lisbon, and the Hotel Victor, in Sintra, was the original owner of the lands that are now the location of the Vila Sassetti. The project was commissioned from his friend, the architect and scenographer Luigi Manini (1848-1936), with the main building, a revivalist recreational home designed as a summer residence, built between 1890 and 1894. Following the death of its owner, the villa was rented to Calouste Sarkis Gulbenkian between 1920 and 1955, who occupied it sporadically through to his death. Between 1955 and 1958, the then owner Isabel Armanda Luísa Real ordered the building of the Keeper’s House and expanded the main building adding on the current eastwards wing and installing sanitation facilities. In 1984, the new owner, Sara Gabriel Teixeira Albergaria, undertook some requalification work on the villa and its gardens.

Sintra Municipal Council acquired the property in 2004 and, in 2011, Parques de Sintra purchased both Villa Sassetti and the adjoining property with the objective of preserving both its heritage value and making available a new means of access, via footpath, from the Historical Centre to the National Palace of Pena/the Moorish Castle as an alternative to the Pena ramp. In order to attain this objective, and taking into consideration the advanced state of degradation that Villa Sassetti had entered into, a global multidisciplinary project was designed with implementation beginning in 2014.” (Information from: https://www.parquesdesintra.pt/en/noticias/opening-of-the-pedestrian-footpath-through-villa-sassetti/) 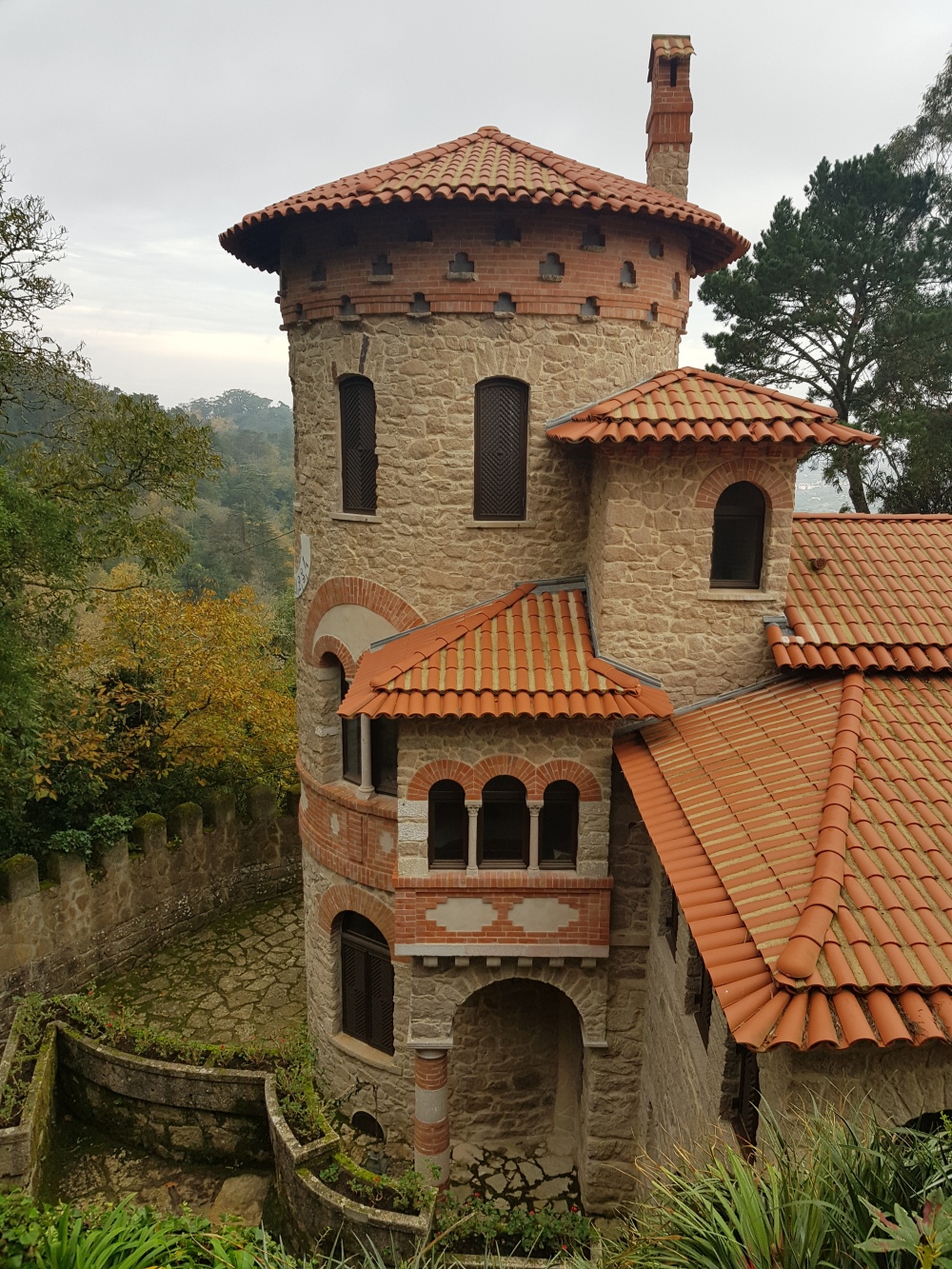 We had the villa and the path from Castelo Dos Mouros down to Sintra Central completely to ourselves.  The greenery, the views, the endless castles rearing their heads on the various hills really make this walk one worth doing.  Determined to get to walk the walls of Castelo Dos Mouros we took another Tuktuk in the rain up to the Castelo.  The Portugese are so friendly and as soon as they find out we are from South Africa seem so excited to engage and chat and take us somewhere we haven’t expected or planned.  This guy was no different and took us to the sneaky entrance of the castle avoiding any possibility of a long queue. 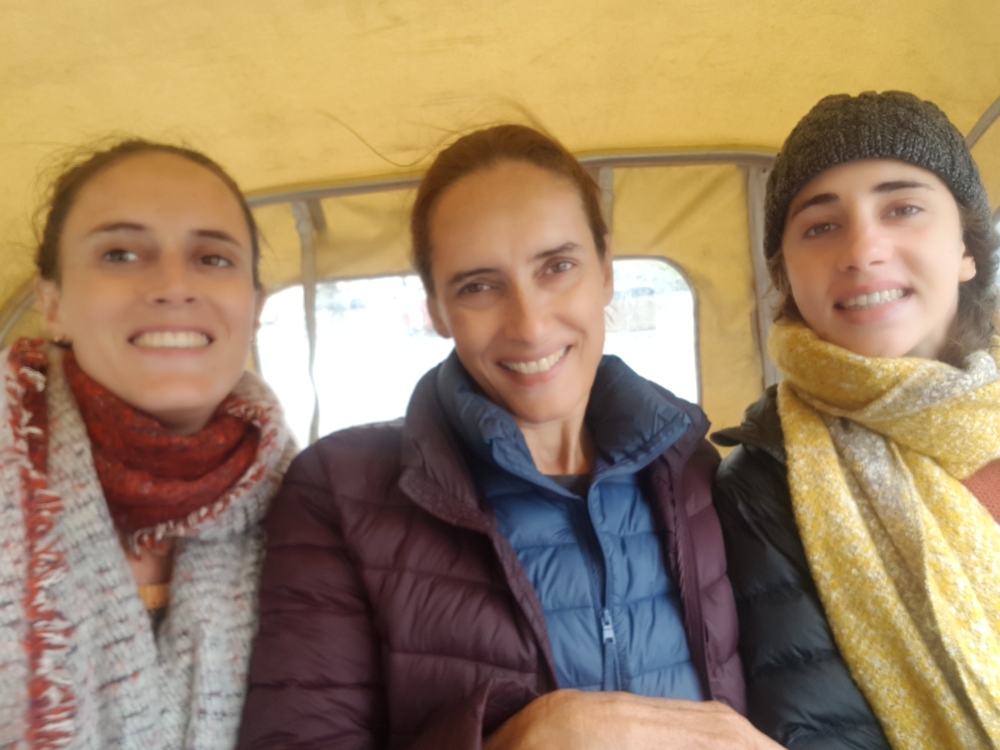 Castelo Dos Mouros is one of those tourist attractions that I really think “anti-touristy” people should bite the bullet and enjoy.  Yes, there are plenty of people walking the walls, snapping away for instagram and posing on the walls like they’re about to hit Vogue.  But you have to be able to see past that, as the views are beautiful.  With a seascape of the Atlantic in view, a scattering of castles below you and a blanket of lush greenery surrounding you. I was silenced by the beauty.  In fact, I took myself away from my mum and sister for a bit and took a breath of the crisp winter air and a moment to appreciate everything surrounding me.  You can feel the history, you can feel the architectural wonder and the beauty of nature.

The interesting thing to me about the castle, is it was actually left to ruin after lightning struck it and a fire broke out.  It was King Ferdinand II who ordered its restoration, in order to look at its grandeur from the Pena Palace and spend time in the Pena Gardens in between the two.  The king LOVED art, drama and the good life and actually when you wonder through the walls of Pena Palace this is evident.

Its quite remarkable as you wind yourself along the walls of the castle, with a different view opening up from every turn.  It was originally used a lookout point, which is rather obvious when you are there.  Jamie and I had a lot of fun picking out which Castle we could see that we thought we would own if given the chance to claim the real estate

Jamie left us, as mum and I travelled the touristy path up to Pena Palace.  And oh my gosh, the artist in me yelped with joy.  I loved it.  Every wall, every window, windowsill, arch had something that caught my eye.  I wanted to photograph everything . I honestly think I could have spent all day there.  My favourite panel was on the entrance arch, every single tile was hand painted with a soldier.  See below.

Every single detail caught my eye.

The palace is described as “a master piece of romanticism” and it is not hard to see why. 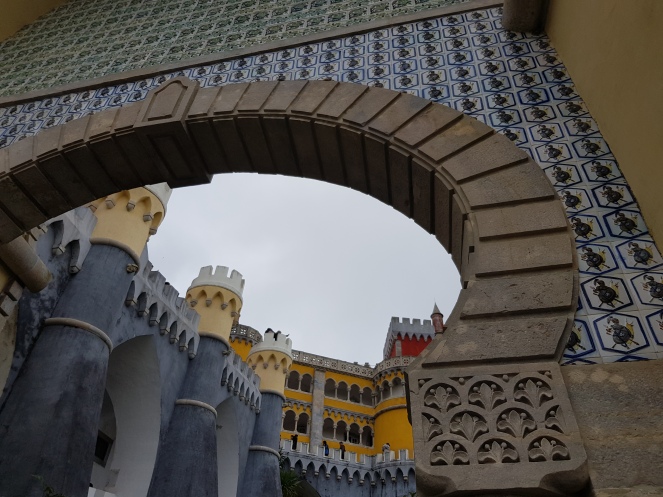 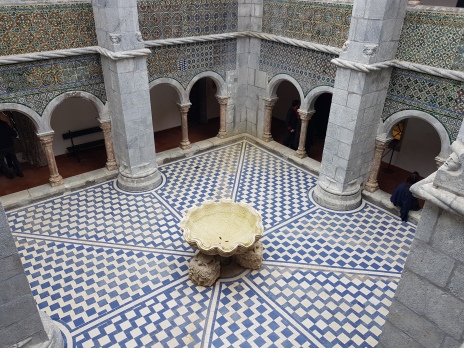 Mom and I were in creative heaven, both of us snapping away wildly, filling up our memory cards with a beautiful selection of colours, textures and patterns.  I was so happy we did the interior tour.  I found it so interesting to see the way the royalty lived.  Especially given my job on the Superyachts.  It really proves to me the lap of luxury my bosses have created for themselves, an endless list of luxury with zero cost spared.  It almost makes these royals look humble.  The era, obviously, plays a role.

I find it hard to write this blog without commenting on what I witnessed with my generation and the seeking for the ultimate instagram picture.  I love instagram.  I really do and I struggle not to post daily, nor to check my feed multiple times a day.  However, I was struck with the notion that so many people, woman especially, were there to take the ultimate instagram photo.  And it was funny, as I had been following Sintra online for a while and I knew the picture people were after and so it was hard not to notice.  My silent hope was that in between striking the perfect pose they had taken a moment to look around and marvel at the unbelievable architecture that made that insta post possible.  Because, truly, apart from making the ultimate post, the Pena Palace is one of the most beautiful works of art I have seen take shape in building form.

The rain forced us in doors and so the wine and the food provided us with a background for card games and very many entertaining moments.  We found some real gems and the food did not disappoint! 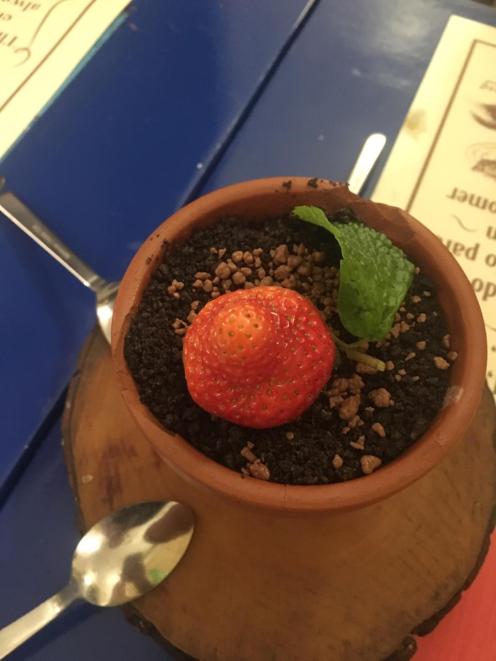