I have been lucky enough to have spent six months in Palma.  We have been in shipyard mode, which means we have an unusual routine, for yachties, Mon-Fri, 9-5, with weekends off.  Normal for the average human, not so normal for us.  And so, my adventurous side has been tantalized in every way, taking hikes up the mountains, exploring all the neighbouring villages, swimming in the freezing seas and eating out as much as my bank account (&partner) allow.   With the last weekend approaching, I got that panicky feeling that I had to fit everything I had NOT done into my entire weekend.  And then, I saw I was on watch, bugger. Only one weekend day to DO.

And so with an fun final crew dinner out at a beautiful beach club (Puro Beach Club) on Friday, my Saturday started a little later than expected and a little more cloudy-headed than I wished for.  We drove North-west into the the Serra de Tramuntana area, finding ourselves winding deeper and deeper into terracotta roofs and olive groves.  It truly is beautiful.  When the area was first run by the Muslim settlers, they established the area with terraced gardens, introducing an impressive irrigation system that has left a successful agricultural impact throughout Deia.  The remaining impression of this is beautiful terraced hills with stone homes, “fincas”, packed tightly together, and wrapped with luscious green leaves and brightly coloured flora.

We drove through the town and took a sneaky little road to the left, winding right back down towards sea level and to a number of cars with the same idea.  The best thing, is from the road, you would have no idea that right below, existed a tiny little beach/cove with two restaurants glancing over it, serving expensive sea side meals to sun baked tourists.  I have never understood tourists sitting on stoney beaches when there are sandy ones just around the corner.  I also, always giggle, particularly at the ladies, when they try to make glamorous exits out of the sea and the stones have a different plan from them, turning their legs to jelly and usually resulting in a stumble or five. Ha ha. It happened to me.  The water was clear as day, with the turquoise sky deliciously creating a beautiful image of this little cove.  I swam way out towards these little boat houses and did some exploring on the waters edge.  Before hunger took over and our picnic was calling my name.

We drove a little while up the road and came across a very non-descript path, so we pulled over and decided there must be something with a view along the way.  Lugging our cooler bag along with us, we were fortunate to find the rooftop of an old pumphouse that had a great clearing in front of it, boasting the exact view that we were looking for!! Score.  So we pulled out our South African, Inverroche Gin, our Rummikub and our food and revelled in the sunshine and laziness of the afternoon.

Before drifting off into a doze, we pulled ourselves up and got back into the car to find the hotel we had heard so much about, The Belmond La Residencia. Wow.  it was absolutely breathtaking.  I felt like I had walked into some dreamy grandeur, complete with every colour of flowers possible.  It was so beautiful!!!

I felt a little bad sneaking in, in my beach clothes, definitely the most underdressed human in there.  But I was also not going to pass up having some tea and soaking up the atmosphere.  Which is exactly what we did.  We sat on their massive terrace with a beautiful view of the village of Deia.  Drinking tea and trying to hide our amazement of the venue.  The tea was served beautifully and Bryce’s homemade lemonade was tasty!  We shortly made ourselves at home, whipped out our Rummikub and got cosy.  Just as I was about to pay the bill, we saw a musician coming to set up.  I gave Bryce the “we are not really leaving, right?” glance and so we ordered another drink, sat back and waited.

We were so happy that we chose to wait, becase Juan Reyes was the best Spanish guitarist I have ever heard.  His music had that traditional sound of the flamenco spanish guitar that evokes romance and dreaminess and takes you exactly to the kind of place where I found myself sitting at that moment.  His fingers danced all over the strings and with his eyes closed, you could see that he transported himself into another world!  It was beautiful.  We ordered another wine.  Stayed for his second set and watched as the sun set over the valley beyond Deia.  Orange melting into blue, with the strings luring the sun way down past the horizon.

What a place. Deia. 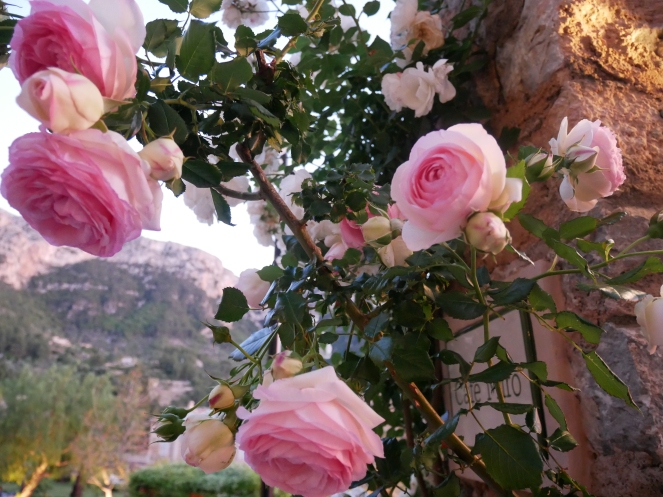