If one had but a single glance to give the world, one should gaze on Istanbul. Alphonse de Lamartine

You need to get out of the center.  You need to walk the wall and look at both sides, soaking in the vastness and greatness of the city, witnessing the meeting of East and West.  Don’t just get caught up ONLY in the bars, they are amazing, they WILL suck you in.  Even the ones that only serve tea.

One morning, we caught a bus just outside the city to Yedikule.  We had been sitting at a bar the night before, looking at our map and coming up with a plan for the next day, when we noticed the long wall stretching across the expanse of the one side of our map.  And so we did a little research and to our delight it was a pretty simple trip to get there.  It was strange to us that no one knew about this walk or had mentioned it to us on our “to-do-lists” we had been sent.

(see our video of our day:)

The beginning of the wall starts at the Yedikule Fortress, a large fort that stands over the edge of the water. It hasn’t been well looked after.  The grass grows wildly in the middle and it’s walls are crumbling down.  I suppose the artistic side of me finds that a little romantic, but it is a little sad that the history and the stories have not been preserved.  You get these feelings most of the way along the wall.  We weren’t allowed inside the fort, the police were guarding it, so I guess it added a little more mystery to the inner secrets kept from us.

And so, without much further adieu, we continued to walk, with no maps, or directions, just over the road, our adventurous ways calling us up the side steps of the wall.  And it was then that the lengthy, broken down walls opened themselves up to us.  With grass growing on top, walls crumbling around us and little children hiding in the cracks and crevices, we curiously and excitedly strolled along.  On either side of us, different stories unravelled;  old ladies tending to vegetable gardens, kids playing soccer, young romantics sneaking away into the cracks for some “quiet time”, naughty teenagers hiding their cigarettes from their moms and dads, stray dogs searching for some left over scraps.  It was all there.  It was all magical.

We were in awe.  Amazed that this wall which was constructed during the reign of Theodosis II (408-450), the emperor of Eastern Roman Empire, was to protect Constantinople (now Istanbul) from enemy attacks.  It’s really interesting because you can very clearly see the structures of the main walls, the front walls and the moats.  The main wall which is built with bricks and stones is 11-14 metres high and 4,8 metres wide.  The inner parts of the walls contain stairs, walkways, passages, dentils, basement floors and doors.  All of which you can explore today.  And very few of which have been preserved.

The front walls are about 13,5 metres ahead of the main wall and 4 metres width in average.  And then you get the moats which are in front of the main walls, have a width of 17,5 metres and a depth of 14 metres.  The distance of the entirety of the walls (9km) are separated by 9 different gates.  Each of these gates, open to doors that link the city west to northwest.  If you walk the full distance of the wall, it is pretty cool to see all the different styles of the gates.  Apparently the Mevlevihane Gate is the best preserved one of them all.

We weaved our way in and out of the walls, sometimes walking on the inner wall, sometimes walking outside the moat.  It was pretty cool seeing a section of the wall, where they had used the moat to house some pretty massive vegetable gardens.  And lined right next to these gardens, were a couple of roadside shops where you could buy your fresh goods.  So with a delicious, organic carrot in hand, we snacked while taking in the beauty of our surroundings.  It was pretty surreal.

At times, we were running across highways, and at other times we were weaving through residential areas to get back to the wall.  It was awesome and special to be out of the buzz of the city and in what felt like the reality of Istanbul.

Half way through the walk, we found ourselves in the middle of some kind of political parade.  With everything going on around the world, we weren’t sure whether to be nervous or intrigued, so we looked around a bit and then paid 10 lira to go into the History Museum.  Here they had cleverly painted a panaromic view of the conquest of Constantinople.  While listening to war music, you wonder around the room and take in a mix of media, some 3-d modelling and some very realistic paintings of the war.  Bryce was entranced.  I felt a bit claustrophobic- lots of people and not a lot of fresh air.   I cleverly distracted Bryce with the idea of a sandwhich and managed to get him out of there and into the fresh air of the large green park surrounding the museum. 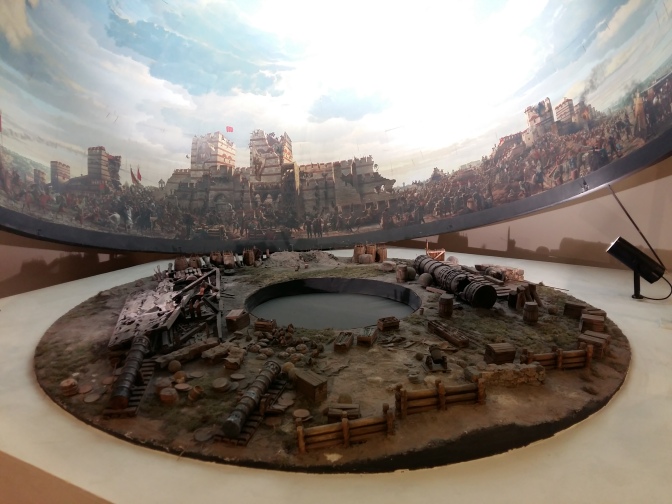 From there we crossed another high way, got back onto the wall and then found a delightful selection of bars and restaurants cosied up into the wall.  By this stage the tummies were rumbling a little and the idea of a typical Turkish mezze was delighting us.  So we sat down, ordered some tea and snacked away!

With our bellies full and our hands warmed by the tea, we continued our journey, determined to make it to The Golden Horn (The End) before dark!  We didn’t realise that it would take us all day, but we were so lucky that by the time the sun was setting, we were at the top of one of the towers, able to soak in the beauty of dusk turning to night.

By the time we reached the end, we felt so accomplished and so well rewarded.  Istanbul, once again, had shown us another perfect day.

tash, a creative girl, with a love for food and the great outdoors, always moving, always learning. View all posts by Tashels